Ibercaja Foundation joins the Smart Green movement within its commitment to the reforestation of trees in Aragón in collaboration with LG Spain and CO2 Revolution. Smart Green is an initiative led by LG  that unites large companies with the aim of fighting climate change by planting trees throughout the country. Reforestation will begin in 2021 and will be carried out with drone technology and smart seeds. José Luis Rodrigo Escrig, general director of Ibercaja Foundation, and Jaime de Jaraíz, president and CEO of LG Spain, signed the agreement this morning at the Cogullada Monastery.

The plantations will be carried out together with CO2 Revolution, a company founded for the recovery of forests and their ecosystem, which uses science and technology, with drones, smart seeds and LG ecotechnology to achieve an effectiveness in planting up to 80% higher than with traditional methods.

“At Ibercaja Foundation we have more than 140 years of experience working for the development of the territory and improving the welfare of people,” says José Luis Rodrigo Escrig, general director of the entity. “For us it is an honor to sign agreements like this one because they raise awareness in society in general and draw attention to global challenges to which we can all contribute, such as working for sustainability and the fight against climate change.”

“At LG we have been defending trees for years as the only technology capable of curbing climate change. We all need to join forces and act now to save our planet,” said Jaime de Jaraíz, president and CEO of LG Iberia. “We felt from the first moment the drive and enthusiasm of the Ibercaja Foundation for this project and, thanks to them and the support of more entities every day, we are closer to our goal of planting 47 million trees in Spain each year, one per inhabitant”.

For Juan Carlos Sesma, CEO and Co-Founder CO2 Revolution, “going hand in hand with LG and Ibercaja in this new action shows the great environmental awareness and commitment of both companies to continue growing in an ambitious project in favor of the recovery of Spanish forests. Investing in trees means investing in the future in every sense. They are a business example of a true ecological transition towards a sustainable development model”.

This initiative is part of the integration of the Sustainable Development Goals in the actions of both companies, with the aim of achieving a future that combines development, environment and a better quality of life for us and our children. 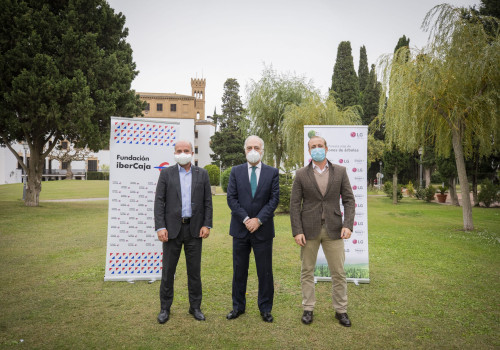